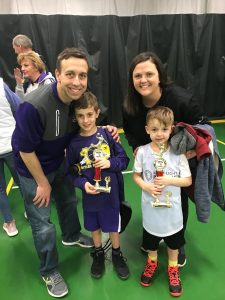 Jeff graduated from DePauw University in Indiana in 2002 where he played baseball for 4 years and earned a degree in Communications.  He obtained a job working for 5/3rd bank out of college and then moved over to Key Bank in 2006 where he still works today.  He now is working in Commercial banking for Key Bank.  In 2017 he was named 1 of 40 under 40 chosen in the Dayton Business Journal. He currently serves as Vice President of the Optimist Club in Vandalia, has served on Visions Endowment Fund, Project read and other boards,  as well as coaching both of his sons’ athletic teams year round.

Molly Bardonaro graduated from Ohio University in 2002 with a degree in Early Childhood Education. Molly obtained her masters in educational leadership from The University of Dayton and then went on to receive her Principal’s license from there.  She worked at Tri-County North teaching 3rd grade for 6 years and coached the Varsity girls basketball team for 4 years. Her current job is teaching 3rd grade at Helke Elementary for Vandalia-Butler Schools.  She has been in Vandalia Schools for 11 years (5 at Murlin and 6 at Helke).  She has been the Girls Varsity basketball coach at Butler for 5 years now.   Molly has twice been named the Coach of the Year by District 9.

Jeff and Molly were married at St. Christopher church by Father Frank Kefrel on June 10, 2006.  Molly and Jeff have and continue to be St Chris Parishioners since 2005.  They have 2 boys together, Bennett and Joey. Bennett is 9 and in third grade and Joey is 6 and in Kindergarten.  The children are and will continue to be part of the St Chris G.I.F.T. Program.  We are a very active family involved in numerous sports.  Both boys are involved in soccer, basketball, and baseball.  We travel to Destin, Florida, yearly, as well as other favorite vacation spots.  We continue to live in the Vandalia community and love being able to raise our children in the same community we both grew up in and in which we both received outstanding educations and lifelong opportunities. Molly and Jeff and both of our children received wonderful religious and academic foundations by attending the childcare center for several years and attending kindergarten at St. Christopher.  We both have so many wonderful memories from St. Christopher from the teachers, projects, trips, and friendships.  But our proudest memory of St. Chris is that it brought us both together.