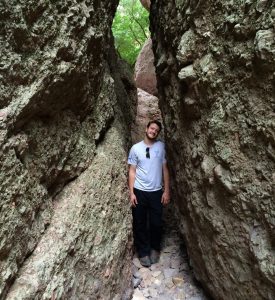 Job:  After attending Chaminade-Julienne High School (class of ’06), I graduated from The Ohio State University in 2010 with a degree in Geography. I have spent the last 8 years pursuing a career in Geographic Information Systems (GIS), more commonly known as Cartography, which has allowed me to travel to and experience many new places across the country. Post graduation, I lived and worked in Columbus, Ohio, as well as Denver, Colorado. In 2015, I moved to San Jose, California, where I currently live and work for Apple Maps as a Field Coordinator. In my free time I like to explore the outdoors which includes hiking, camping, skiing, and visits to numerous National Parks in California, Utah, Washington, Colorado, and Arizona, with the hope of visiting many more in the future!

Pat says:  “There is no question that my experience at St. Chris helped shape who I am today and prepared me with the skills necessary to successfully achieve my educational and career goals.”

Job:  Head Volleyball Coach at the College of William and Mary